The magic of nature

put all their energy and soul into the restoration and maintenance of "Their Forge" so that it recovers its former splendor.
They provide their guests with an extraordinary building surrounded by a park which spreads in hemicycle on 16 hectares along a river named La Dure. 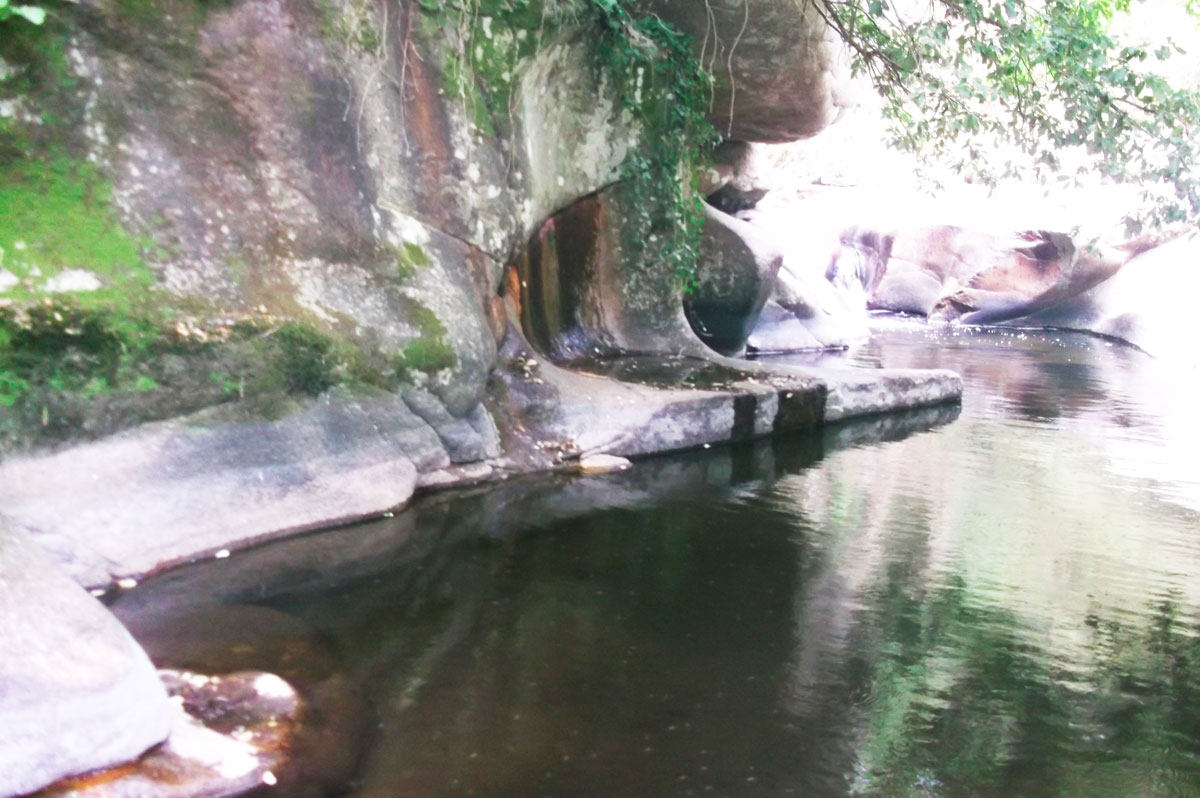 A waterfall upstream of the land and a path of plane trees downstream delimits the property.
Between these two points, a stable (1850), a greenhouse (1930), the house (19th c.) and the ruins of the forge are connected by flowering walks, mossy and wooded, which makes between granite, limestone, pebbles, stones and rocks, this place completely unique.

Water, everywhere in the form of a river, canals, springs and waterfalls gives a musical, purring and refreshing atmosphere that inspires and relaxes at the same time. 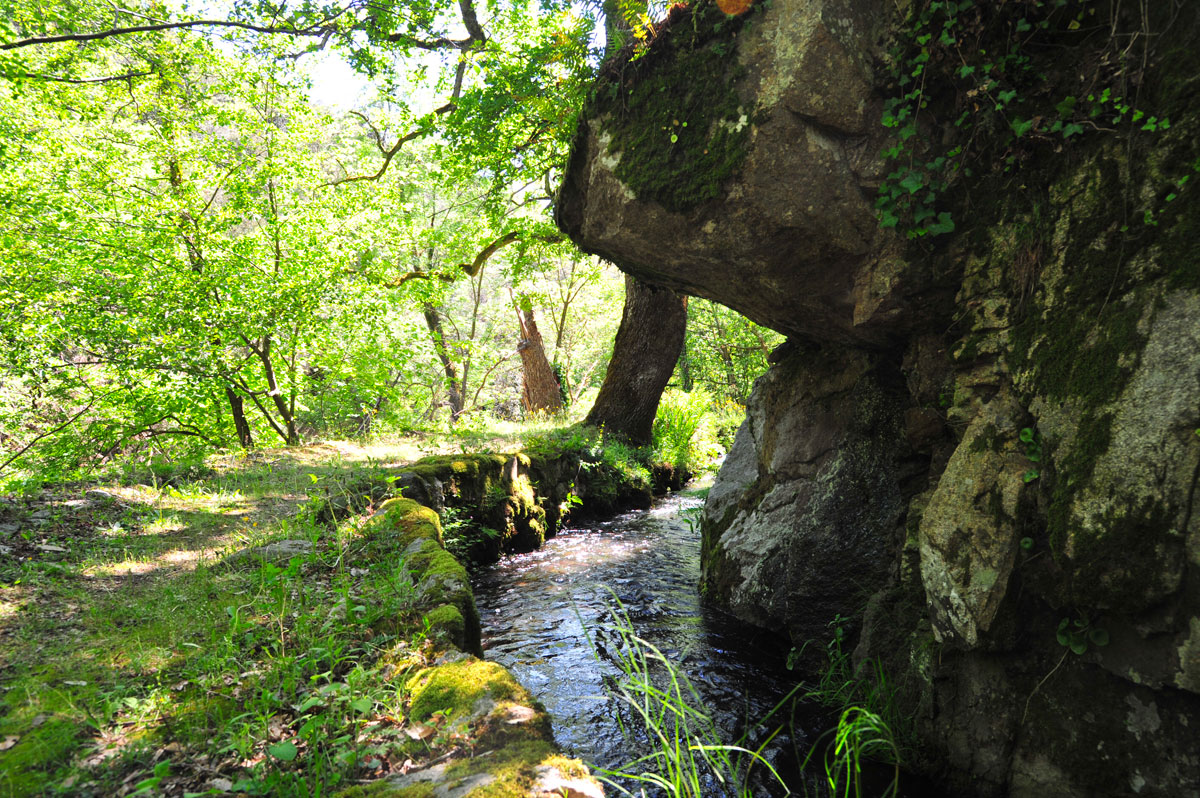 have updated forgotten walks, nooks and crannies, surrounded by trees with various species and lined with flowers.
Not to mention the presence of the great Douglas pine, ranked "Outstanding Tree" in France by the association A.R.B.R.E.S.,
a centennial tree that dominates the property.

In 2013, the old estate joined by the acquisition of the neighboring lands adds to what is described above two small houses, a lake
and a whole complex built and old system of collection of water runoff from the Montagne Noire by reservoirs of masonry, water channels, underground pipes and streams ...

Everything is covered by old paths

- in particular the main access, a cobble stone road (XVIIIth) to the Forge - allows the course of the grounds and maintenance in the middle of wooded spaces and beautifully landscaped lawns for thirty years.

THE PARK - THE GARDENS

At the same time at altitude and at the bottom of a valley, subject to gradients, the ground has many areas very varied in terms of soil composition as well as exposure to light and its irrigation.

Nature and Man's Hand closely intertwined make up a remarkably diverse and homogeneous park.
The work, the thought, the love of the Man participate as much as wild fauna and flora seize it. 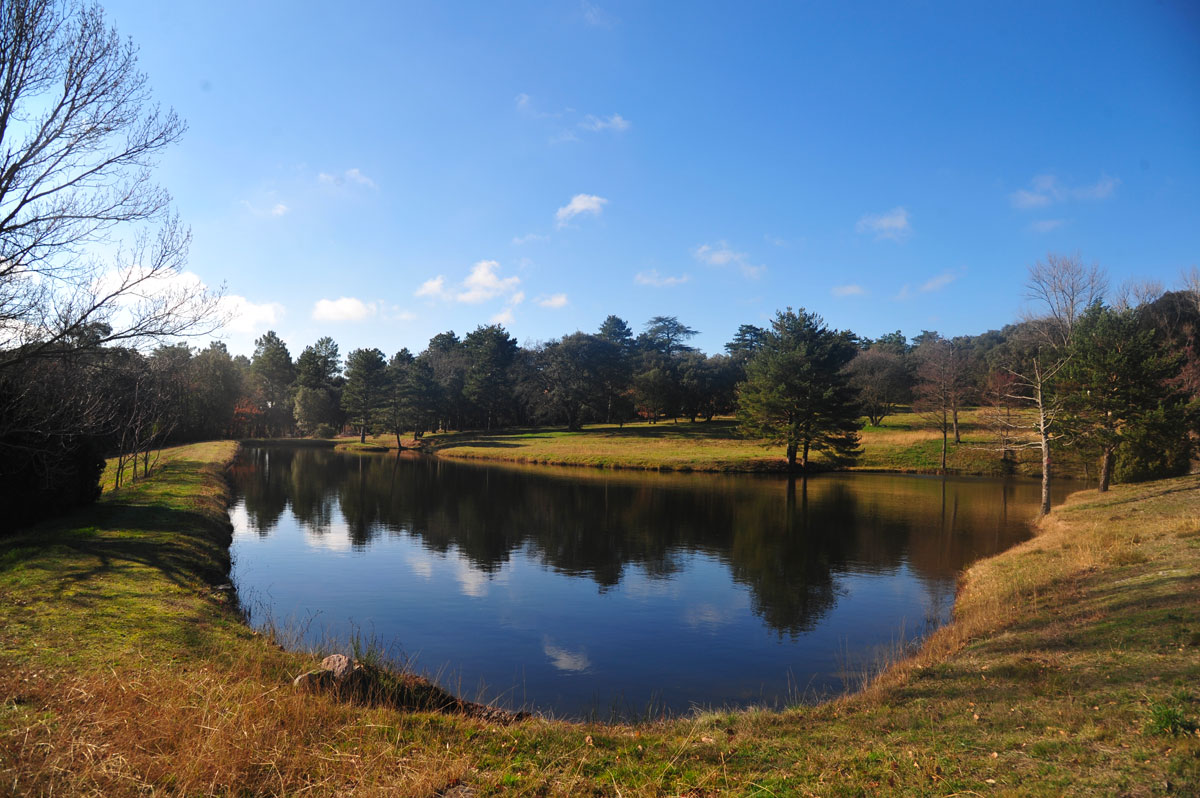 Winner of the first prize Aude Fleurie 2012, 2014, 2016 and 2017 for the most beautiful bed and breakfast park as well as selected for the event of Printemps des Jardins 2012 as one of the five gardens of the Aude " to see absolutely "by the Ministry of Culture (reports on France 3 and many journals).

Wild, half planted, what we find, all seasons:
• A collection of rhododendrons and azaleas: species and hybrids, spectacular flowering in May-June;
• Mosses, lichens and ferns in very large areas and varieties;
• Wild flowers in carpets: snowdrops, violets, periwinkles and cyclamen;
• Elements of Mediterranean gardens in places like palms and yuccas;
• Saint-Joseph lilies, seringa planted once, become wild again;
• Remarkable and ancient conifers such as Douglas pines, cedars;
• Many chestnut trees, oaks (white, green, Canada), magnolias, arbutus, maple trees;
• About thirty citrus trees (orange, lemon, buddha hands, yuzu) depending on the season in the orangery or outside;
fruit trees in lyre;
• A nursery of young shoots, cuttings, taken from existing vegetation and replanted here and there, as the seasons go by which succeed each other.

TEXT OF A VISITOR

We enter this wild valley and laughing at once, lost garden, found, the field of La Forge. The high building, one foot in the torrent and head between the wooded hills, monitors its terraced gardens. At the back, the immense Douglas; before, in the distance, an old avenue of plane-trees eaten with azaleas and hydrangeas, witnesses of what was formerly; under the Ginkos already cyclamen; everywhere surprises: turf beach embraced by colorful flowerbeds; profusion of roses; citrus fruits in pots around the trough and the greenhouse; cascades can be seen through the bamboo, noisy, splashing, they throw themselves laughing in the reef cleverly restored on slopes recreated.
A swings corner, a fountain with basins, culinary plants on the edge of the entrance terrace, chef's choice: Charles Cowen in love with all the flavors.

But we have not seen anything if we do not climb the assault of the hills, crossing bridges, following a path, another, at random of our choice, a bench, a carpet of periwinkles.
Finally there is the inevitable walk of the béal: sinant chiaroscuro between mosses and ferns; sometimes at the peak of La Dure who sometimes lounges inviting on its beaches an arranged descent, or captures the look on a bubbling between stones eroded so many past floods.
On the way back, we will be able to interview Charles Cowen, the master gardener, and Laure, his wife, about the impressive work done in just two years in this magical place that has seduced them irreparably.

For Laure and Charles.

We went from the plain and the very slow canal to the first hills. We crossed the village with narrow streets, with all its books and two ravines. And then we arrived on the Causse from where the view goes, in winter, to the Pyrenees. We arrived on the Causse dry, flat, eaten viburnums, small oaks and meager boxwoods and there, we took on the right the path of dust without knowing, the first day, where nor how far it would lead us.
Suddenly, in a descent, it is first of all large trees, a very tall building that one does not understand, and very quickly the lavish and luxurious waters that come down, cascade, murmur or growl constantly. A freshness, a vigor almost unthinkable, here in this dry country. We look, we shut up. We guess it: there is here a story, old and that we feel reborn, spawn new ways.
We listen: it was a forge, yes, and even if the clatter of metals no longer covers the sound of water - that of the reach and the torrent that goes from basins to rocks - it remains a forge: a place of vigor and of just strength. It was also a place of spinning and weaving, and it still remains, even if the great trades are gone and that only remain of the old state: the vastness of the pieces, the high ceilings, the large and so many windows and so light, light everywhere, despite the narrow valley.
We understand: this is not a place like any other, not one of those stupidly so-called charming places that advertising boils about. As if, in truth, there could exist places on the planet reserved for a stupid and sterile idleness, where no one ever works, where the nature would lavish its benefits without the man putting the hand, the arm, and the heart and intelligence! In short, not one of these places made for postcards and forced leisure where no one lives, in truth. Of course, this does not mean that charm is powerful, so much so that the word takes again its first meaning, almost magical. We have been caught, we are attentive, silent: we have seen - a flash - the arrow of the kingfisher, the stealthy wonder of the ocellated lizard, some rare butterflies and, longer, rhododendrons, hydrangeas, also unthinkable in full middle of the forest. The waterfall of the torrent was taken on his shoulders - happily.
And we still listen to the new and old history: the paths found, the trees cleared, the flood of a century ago, the orange grove to rebuild, tomorrow, one day, the pond a little higher than it will be necessary to cure, the choice of the reception, that of being hosts, the beloved books, the endless but so beautiful tasks, the crazy and just projects. And all around, the child who grows up, the desire to work, the hand of man and the song, the singing work of water.

Pascal Riou, born July 6, 1954 in Aix-en-Provence, is a French writer and poet. For nearly ten years he was, alongside Marc Leymarios, the director of the collection D'une voix l'autre, promoting the writings of unknown authors of the public. He is now assistant director of the literary journal Conference. He is also a translator and his work is published by Cheyne Editions as well as Revue Conférence.
info@forgedemontolieu.com
(+33) 4 68 76 60 53
© 2018. All Rights Reserved.
Siret : 51239545000012